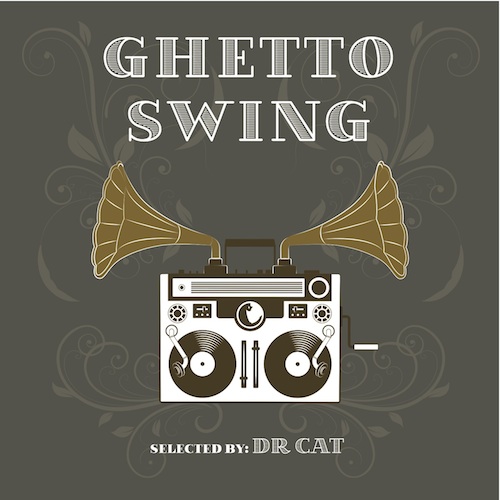 Ghetto Swing is a new compilation with a fresh take on one of the most exciting new genre of our era, Electro Swing. Whilst keeping to the tradition that meets 1940s and 1950s sampling with 21st century style clubbing, Ghetto Swing introduces the grit and grime of hip hop, reggae and dubstep via the likes of MC Navigator, Jinjah Bless and Sound Nomaden.
Compiled by London based, Dr Cat, the album is a groove-laden mix of the vintage samples and underground music. Dr Cat is also co-founder of Green Queen Music and long-standing figure in London’s underground electronic scene, so putting together something unusual and exciting is no new feat.
Expect a disc that is dancefloor heavy, you’ll be dancing to big beats donning top hats, and bow ties, flapper dressers and rouge. Classy, but leaving a dancefloor with no choice in the matter of getting hot n sweaty, leaving all sense of decorum at the door.Other artists include: Parisian duo, Bart and Baker, via jazz and house who priding themselves on reinvention, have successfully released 6 full length albums through Wagram Music.
Defunk brings an essence of glitch and dubstep and 1940s blues to the album with Jive Is Good For You alongside funky breaks via Bobby C.’s Andyman track.
Dutty Moonshine, aka Michaek Rack and Alex Furly, are no strangers to hip hop and jungle and you’ll be jumping to their modern basslines when InTuYa starts up.

9 years ago in News
Newsletter